Eberts Entrance Scholarship
These merit-based entrance scholarships of up to $15,000 will be awarded annually to incoming students entering Grades 7 and 8 and Grades 9 and 10 who best exemplify the CDS commitment to education with balance.
Eberts awards will be renewable each year provided students maintain high academic achievement (honour role/80%+) and contribute as active and positive members of the school community.

While all five Eberts Entrance Scholarships are based on merit, at least one will be awarded on the basis of financial need each year.

All applicants must complete and submit the full CDS admission application, scholarship application, and if applicable, the Financial Aid for Canadian Students (FACS) application by February 2, 2023.

In addition to engaging in the comprehensive admission process, candidates are required to submit the following by February 2, 2023: 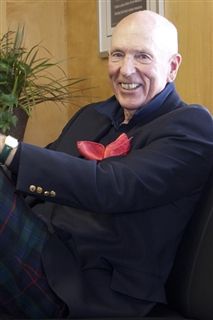 Edmond G. Eberts was born in Montreal in 1938 and attended Bishop's College School on a scholarship. In his graduating year of 1956, he was appointed Head Prefect and was presented with the Hartland B. MacDougall Medal for leadership, integrity, industry and games - the school's highest honour. Mr. Eberts graduated from McGill University with a B.Sc. in 1960.
In 1970, he began exploring the feasibility of starting an independent school in King Township. Two years later The Country Day School opened its doors with 47 students, including his daughters, Jennifer and Rachael. His youngest daughter, Katie, entered Grade 5 in 1986 and graduated from CDS in 1994.
Today Mr. Eberts remains a loyal supporter and visits the school regularly. His goal in endowing the Eberts Entrance Scholarship is to ensure that qualified Grade 7, 8, 9 and 10 students are able to experience the many benefits of an independent school education, just as he did.

Mr. Eberts is very proud of and thankful for what others have contributed toward ensuring The Country Day School's continued success. In his words, "No joy is greater than the joy of generosity."