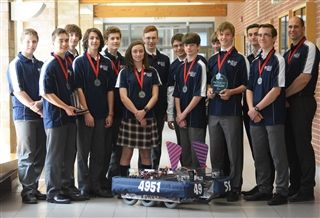 The unstoppable power of a cyclone makes it a truly spectacular example of what happens when individual forces work together. The CDS Cyclone Robotics team is a perfect example of the power generated when creative minds focus their energy and time on producing a mechanical marvel like the one we developed for our inaugural year in FIRST (For Inspiration and Recognition of Science and Technology) Robotics Competition (FRC).

The Cyclone Robotics team was established in the fall of 2014 after witnessing the excitement and popularity that grew from our VEX Robotics Club the year prior. We will continue to run the VEX Robotics Club year round in the Senior School as a launching pad to the FRC program. This year’s FRC team consisted of 20 students and was supervised by three passionate CDS Faculty members: Mr. Chris Wappel, Mr. Jason Jugoon, and Ms. Aimee Lee. With this team of creative minds, we were a force to be reckoned with in spite of our lack of experience.

We have grown significantly, both as individuals and as a team. Thankfully, we received generous seed funding from Mantella Venture Partners to launch the program. Additionally, other parents and partners graciously contributed to alleviate some of the costs of running such a popular program. Our mission was not to win every competition, but to immerse youth in STEM (science, technology, engineering, math) related disciplines that accentuate the importance of learning in the classroom, promoting curiosity and creativity, and acting as a catalyst for newly discovered passions in engineering, science and design.