In 1971, a group of determined parents in King Township saw a need for a co-ed private school for Grades 1-8 north of Toronto. These parents included our founding families: Moffat and the late Margo Dunlap, and Edmond and the late Daphne Eberts.

Neither the Eberts nor the Dunlaps had any experience in starting a school, however, they dutifully did their research. Having grown up in the U.S., Margo Dunlap was familiar with the country day school movement and sought the advice of a cousin who had been involved in starting the Maclay School outside Tallahassee, Florida in 1968. Margo suggested they call their proposed school ‘The Country Day School.’ 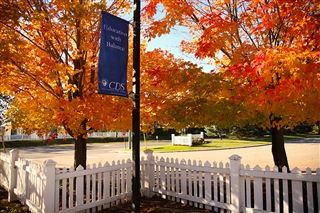 In March 1971, an expanding group of dedicated parents hired John Pratt, a former English teacher at Bishop’s College School and Trinity College School to conduct a feasibility study. John’s research was evaluated a year later and the decision was made to proceed with the opening of The Country Day School in September 1972. John Pratt was hired to be the first Headmaster and three other teachers were hired shortly thereafter from far and wide: the late Alison Scott, the late Peter Taylor and Christine De Witt.

On September 11, 1972 CDS opened its doors to 49 students in what was formerly the Eversley Public School. This rented property, which the School later purchased through a reserve bid in 1978, included an original one-room schoolhouse – Eversley Schoolhouse – built in 1883, and two large classrooms.

To this day, community remains at the core of all that we do at The Country Day School and a sense of shared connectedness with the School remains at the heart of our collective motivation to see CDS prosper.

CDS is now recognized among Canada’s top independent schools and offers programs in JK-12 to a student population of 770 students. Our property and facilities have expanded over the years, while our beautiful country setting remains the same; 100 idyllic acres beckon just outside our doors.

LINKS TO MOMENTS IN CDS’ HISTORY